Uncategorized TwitterThemeToggler : A Necessary Tweak To Help You Toggle...
Uncategorized

TwitterThemeToggler : A Necessary Tweak To Help You Toggle Night Mode In A Single Tap

The night mode theme is a built-in feature on Twitter that makes it easy for users to use twitter at night, since it makes the app’s layout to darken and become less bright. Once the dark mode is enabled, one’s eyes stop straining, but this feature does not turn on and off automatically. That is where TwitterThemeToggler, a new and free jailbreak tweak comes into the mix. 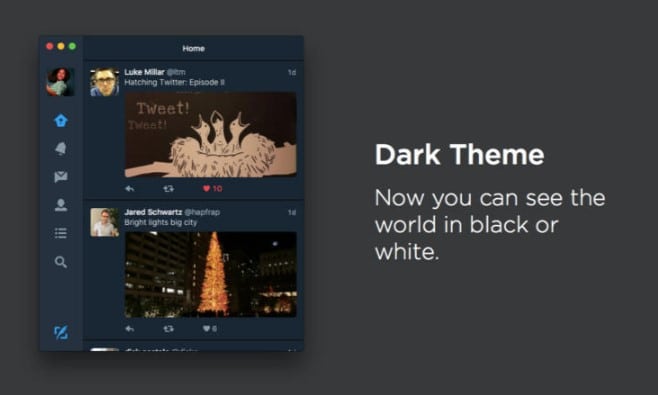 After TwitterThemeToggler is installed, a single tap is enough to enable the night mode on your Twitter application. After tapping, one holds the navigation bar on the app for the effect to take place. The process can be repeated to go back to the earlier theme.

Without this jailbreak tweak, it means the user has to go to the settings menu and then locate the toggle switch so as to turn it on or off. That means a total of four taps is needed to do what can be done by TwitterThemeToggler in a single tap.

As soon as the tweak is installed, it is ready to use as there are no additional configuration options. However, as a user, you might be forced to close your Twitter application with the help of the App Switcher, and then open it so that the effect of the tweak can take place.

Those interested in trying the TwitterThemToggler can visit Cydia’s BigBoss for a free download at any time of the day. At the time this article was being posted, the tweak was working fine with the latest free Twitter app (version 6.68.1) which was available on the App Store.

Though it is hard to predict whether a future update of the app can break the tweak; but should that happen, the tweak will have to be updated by the developer for compatibility reasons. That is something you should always remember before you can update your Twitter app.

Will you consider downloading TwitterThemeTogger for your jailbroken iPad or iPhone? Kindly SHARE with us your thoughts in the section below!

If your New Year’s resolution was based on self-improvement...
Read more
0

Dark Side of the Internet

Millions of people use the internet everyday. It is...
Read more

Top Five Paraphrasing Tools You Can Use On iPhone

Top Five Paraphrasing Tools You Can Use On iPhone "Paraphrasing...
0
Read more
Uncategorized

If you are not using email marketing to promote...
0
Read more
Uncategorized